September 26, 2014 not only marks the 12th year anniversary of the Canadian Centre for Child Protection’s Cybertip.ca program, but also Cybertip.ca Awareness Day. Over the years, Cybertip.ca has made important strides in the protection of children. At the same time, we readily acknowledge there is still much to be done in the fight against online child sexual exploitation. Cybertip.ca Awareness Day is meant to raise public knowledge about this serious issue, as well as highlight the difference that Canadians make by reporting information and concerns to https://www.cybertip.ca regarding the online sexual exploitation of children.

I can’t believe it has been 8yrs since Brian Turnbull retired! He had such a huge impact on my children. He developed and supported their love of music. He is still in touch with my daughter who is studying cello at the Curtis Institute of Music in Philadelphia.

He’s used to being at the forefront, standing there waving his arms in controlled bursts in front of his face, but for one brief moment Brian Turnbull had to stand off to the side, fighting to keep his arms folded and at rest.

It wasn’t easy, the conductor in him coming out at times, his hands again in motion.

The occasion was the year-end school concert at John T. Tuck elementary but the event within the event was a salute to Turnbull.

The 57 year old is wrapping up a 34-year teaching career with the Halton District School Board, the last eight at Tuck.

END_OF_DOCUMENT_TOKEN_TO_BE_REPLACED

June 8th is World Oceans Day, declared by the United Nations at the urging of Canada to protect our greatest resource of oxygen and food supply. June 1st to 8th is Oceans Week in Canada.

ReefCam is donating ad-free live underwater camera feed for Oceans Week June 1st to 8th. You can see coral reef and marine life in their natural habitat in the Carribean. Visit www.reefcam.tv and www.WorldOceansDay.ca

Eleven Things You Can Do To Help Save Our Waterways & Oceans:

END_OF_DOCUMENT_TOKEN_TO_BE_REPLACED

Burlington’s Bike to Work Day is Fri Jun 6th. Come to City Hall 7:30-9am to chat with representatives from local bike shops, see displays and enjoy some refreshments.  END_OF_DOCUMENT_TOKEN_TO_BE_REPLACED 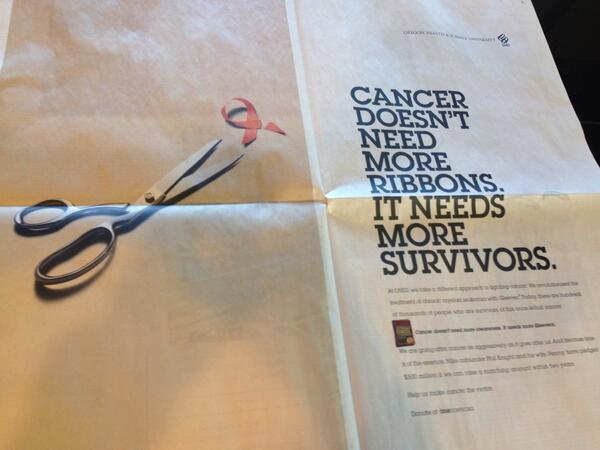 This ad was placed in today’s New York Times from the Knight Cancer Institute, Oregon Health & Science University to celebrate #NCSD2014. For my birthday in Sep 2011, my son took me to the TIFF premiere of “Pink Ribbons, Inc.” based on the book, Pink Ribbons, Inc.: Breast Cancer and the Politics of Philanthropy by Dr. Samantha King, Queen’s University professor. This documentary introduced me to Barbara Brenner (RIP) and the work of Breast Cancer Action and what is wrong with the pink ribbon campaign. “Directed by Léa Pool and produced by Ravida Din, Pink Ribbons, Inc. is a feature documentary from the National Film Board of Canada that shows how the devastating reality of breast cancer, which marketing experts have labeled a “dream cause,” has become obfuscated by a shiny, pink story of success.” END_OF_DOCUMENT_TOKEN_TO_BE_REPLACED

Families wanting to build a kite should arrive early as the kite building materials may run out. Go fill the sky with colour on Sunday.